The racing was fierce and physical at round five of the Monster Energy AMA Supercross, an FIM World Championship inside the Oakland Coliseum…

Taking home the win in front of 46,884 fans was Monster Energy Kawasaki’s Eli Tomac on a track that was tight and produced a good number of aggressive passes.

With his best finish of 2020, defending champion Red Bull KTM’s Cooper Webb snatched second place in a dramatic pass in the last corner before the chequered flag. Holeshot winner and the race leader for 13 laps, Team Honda HRC’s Ken Rozcen looked capable of repeating his win the previous weekend but ended the night in third. Roczen retained the top spot in the championship standings but now only leads Tomac by three points.

The Western Regional 250SX Class also offered great racing with Monster Energy / Star Yamaha Racing’s Dylan Ferrandis taking the win away from Monster Energy Pro Circuit Kawasaki’s Austin Forkner on the tenth lap to nab his second win of the season and take the points lead in the 250SX Class. 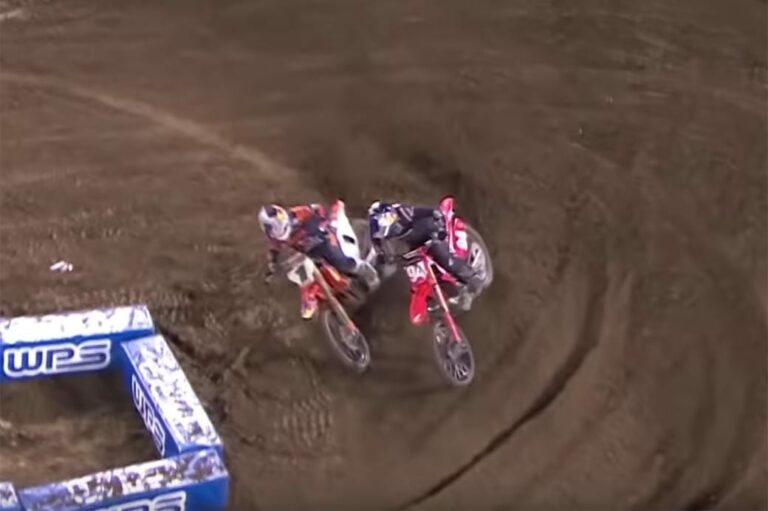 When the gate dropped on the 450SX Class Main Event, Ken Roczen put his Honda up front with Monster Energy Kawasaki’s Adam Cianciarulo, Tomac, and Webb in tow. The four riders separated themselves from the rest of the field, with all four launching a triple-triple combination through a rhythm section just before the finish line.

Seven minutes in, Webb had lost contact but the top three were within 1.6 seconds of one another. On Lap 8 of the 21-lap race, Tomac ran his team-mate high in a 180 degree berm, standing him up on his way past. A slight bobble delayed an immediate attack on Roczen for the lead, but it came on Lap 11 entering a tight corner after Tomac made up time through the track’s short whoop section.

Tomac had the speed and inched away from Roczen, but on Lap 15 he made a mistake through the sand section and came into the next corner too hot. Rather than lay it down, Tomac rode over the berm and Roczen tucked around before Tomac re-entered the track.

Three laps later Tomac duplicated his first pass for the lead – this time he held onto it. On the final lap, the top three positions looked set, but Webb made up ground and in the final corner squared up and came across for an aggressive pass on Roczen that brought the riders together. Both bobbled and both stayed up, but Webb grabbed second place. The pass was reminiscent of Webb’s last-corner pass on Roczen in Arlington in 2019, though that pass was for the race win.

Immediately after the Oakland race Roczen got off his bike holding his right boot clearly in pain.

On the podium, race winner Eli Tomac said: “Once I got to the front, after the sand, I lifted a wheelie, and missed my rear brake when I set the front end down. That’s why I rode over that berm. Luckily, I was able to hop right back on. That was a gnarly fight, I was like, ‘Gosh dang it I just blew it’ but I had enough time to get back to the front. So frickin’ awesome night.”

Webb was asked if he had thought he had a shot at second place on the final lap. “Honestly I thought I was a little far back. I went over the finish and it seemed like a pretty big gap. So I was going for it and I killed the last lap, honestly, and made a run in the whoops. I kinda missed the only passing point on the track. Man, we were so close going back and forth there, and unfortunately made contact in that last turn, but I was really trying to square him up and get underneath.

“You know I’m sorry for, obviously, the contact but we were going for it, and like you said I really need to kinda claw my way back into this championship and every point counts. But it was a good fight.”

Roczen made it up onto the podium with his right foot hurting. “I gave it my all. I didn’t have it today. Even in practice I was just off speed-wise and everything, so I’m glad my starts have been really good. I’ve been putting in a lot of focus on that. And actually, I rode really well, I thought, just towards the end [it got bad], like just bouncing off some of the bumps, you know? I really noticed I left some time on the track and then I made a couple of big mistakes with a couple of laps to go.

“Then Cooper came in on that last lap, which is fine, we’re fighting for the championship and it’s a last turn pass. I don’t know if it was from the slam or my foot got wedged somewhere but definitely [I got] a stinger to my foot, I can feel it swelling up in my boot right now. So I’ll take a look at that later. Overall, you know, I got a podium finish.”

In the Western Regional 250SX Class the racing produced series points changes for the top four positions. When the gate dropped, JGRMX / Yoshimura Suzuki Factory Racing’s Alex Martin led the pack. In the first corner Monster Energy / Star Yamaha Racing’s Justin Cooper was right with him, impressive considering Cooper gated far to the outside thanks to a trip to the LCQ and therefore a bad gate pick.

Cooper got shuffled back on the opening lap while Martin dealt with immediate pressure from Forkner. The Kawasaki rider got past on lap two and tried to gap the pack. Ferrandis, third place on lap one, soon got into second and took chase.

Ten minutes into the race Ferrandis put a move on race leader in a 180 degree turn; Forkner ran wide and off the track, reentering in second position where he remained until the finish.

Justin Cooper, who rounded the first lap in sixth, got past Martin on Lap 15 to grab the final podium position, but it wasn’t good enough to hold onto the points lead. Cooper now trails Ferrandis by two points.

Two weekends ago Ferrandis was put on probation for an aggressive pass. After the Oakland race he was asked if the probation was on his mind when he made the aggressive pass on Forkner for the lead. “For sure I was thinking about it because I don’t want to [be] disciplined anymore. …I saw I was faster in the whoops than Austin and I think he slowed down because of the lapped rider and I came to his inside and made the move. 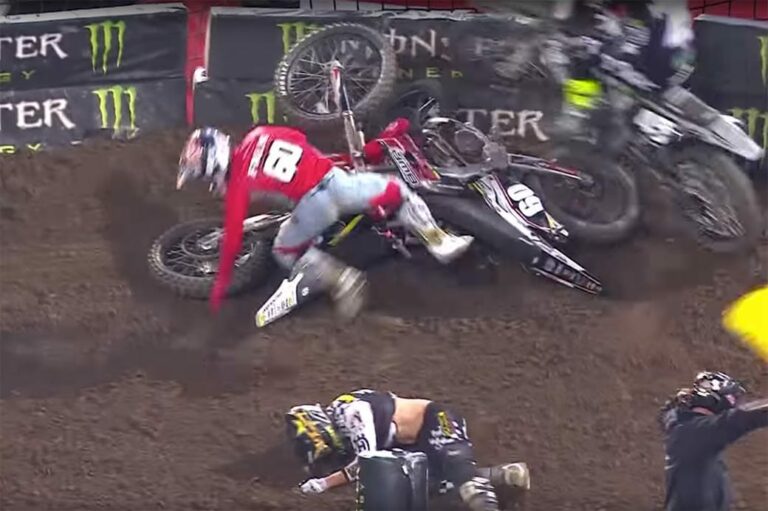 “I think it was okay. I saw on the TV he went off the track but yeah, it’s racing…” The AMA confirmed there was no infraction to his probation with the pass.

Forkner explained what happened with the Ferrandis pass. “We stayed pretty much [the same distance apart] the whole time until I kinda got into lappers. They slowed me up a little bit in the tight section, and then I just made a slight mistake jumping into the whoops, kinda clipped it and he got through them good and just got me. And then I had to come back onto the track and honestly wasn’t close enough after that to try to get something back… No excuses, I just got beat tonight, I’m happy with the way that I rode, though.

“I’ve got a little bit of work to do. But I’m happy. I think I showed my fitness is good, my speed’s good, just little mistakes here and there, that’s what it was tonight.”

After the 250SX Main Event, Cooper admitted it had been a long night of racing for him. “Yeah, I’m just getting tired of the adversity out there. It’s good, it’s challenging, I did what I had to do tonight. I did a lot of laps tonight, so I was pretty smoked in that Main, and just felt like I settled into the wrong pace.

“It was pretty hard to pass out there, so I just took my time and focused on Alex. Just actually happy to actually get a good start and stay up when I hit Alex in the first turn.”

Next weekend the series heads to PETCO Park in San Diego for Round Six, which is the last Western Regional 250SX Class race before that class’ six-weekend break.