The Smartop/Bullfrog Spas/MotoConcepts/Honda team’s run with the 2020 Monster Energy Supercross Series continued in Texas with the 2020 Arlington Supercross, the eighth round of the schedule, at AT&T Stadium.

The Texas race was the second event to run the Triple Crown format, with three 12-minutes sprints that combine the rider’s result of each race to determine their overall score, and the team’s riders once again proved to be a force in the 450 Class with solid results and two top-10 overall finishes.

Justin Hill made it clear that he was one of the fastest riders in the 450 Class at the Arlington Supercross. Hill was at the top spot on the scoreboard through both of the afternoon qualifying sessions and with a 45.958-second lap time, he secured the top qualifier honour for the first time this season. Hill was the only 450 competitor to put in a 45-second lap time during qualifying

With undeniable speed, Hill entered the night determined to win one of the three races and to finish on the podium, but small issues and crashes kept him from doing so. Instead, Hill showed his ability to push his way through the pack. A run-in with another rider in Race One dropped him from a spot in the top-three to outside the top-10, but he rallied back to sixth place. Hill’s best finish of the night was in Race Two, as he started near the front and logged steady laps to finish in third place.

Race Three was arguably Hill’s best ride, but not for reasons he wanted. A simple mistake turned into a crash on the opening lap and he remounted at the very back of the pack but worked his way through the running order to reach eighth place. With 6-3-8 finishes, Hill ended the night sixth overall.

“There is a lot of good to take away from this,” said Hill. “I feel like I was the best guy in the whoops most of the day, which is a huge confidence boost, especially from where I was last year and my struggles in the whoops.

“The first moto should have been really good. I was in third place, had the pace, was blitzing the whoops, and Anderson cleaned my clock before the finish line, which just screwed my whole night. I got up from that and worked to sixth place from way back. The second one was good – I had a decent start and ran up front to finish in third.

“In the last one, I threw it away all on my own. They fluffed some loose dirt over a spot that was hard pack and because you came down that straight so fast, you were never not braking. It’s not like I was suddenly on the brakes hard and it tucked – I was on the brakes the whole time and it just went without warning. If I didn’t get stuck under the bike, I could have gotten up quicker and salvaged more. I got up and there weren’t many people behind me, it was so early in the race.

“Sixth overall, I can’t complain. We are inside the top-10 and are knocking on the door for top-five finishes. Tonight should have been a podium and I’m using that for motivation.”

Hill is now eighth in the 450 Class Championship standings. 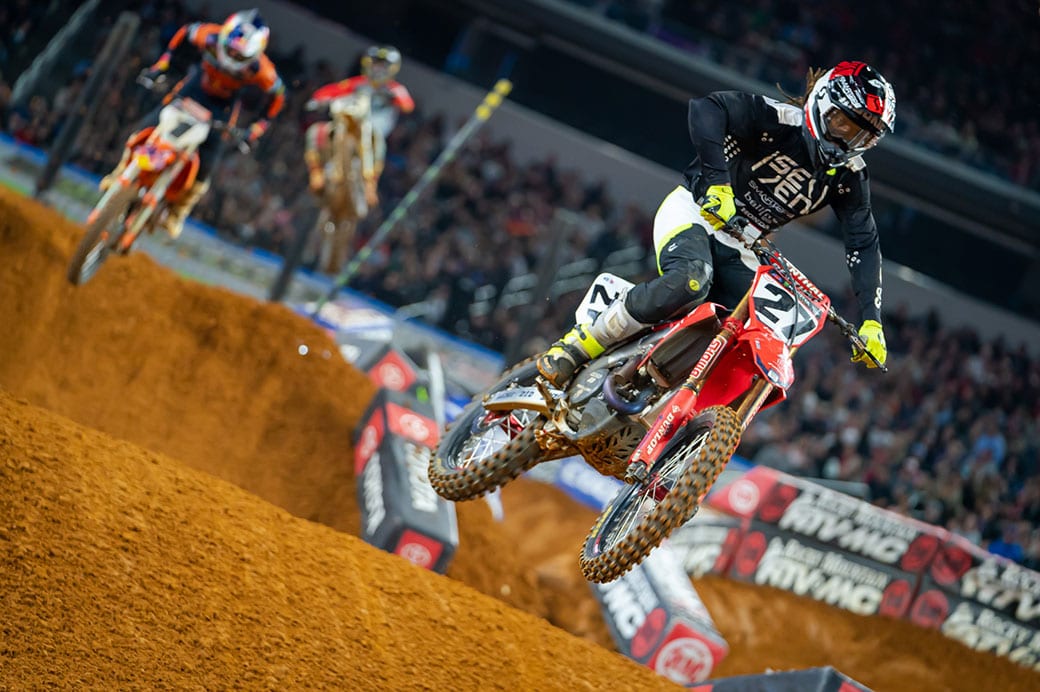 Malcolm Stewart was determined to carry the momentum from his season’s second-best ride in Tampa into Texas. The day started a little rough, as he was one of the quicker riders in the early laps of the qualifying sessions but saw that his best laps were only 13th-fastest in the competitive field. Stewart and the team made the necessary changes and regrouped for the night’s three races. Mid-pack early in Race One, Stewart soon settled into a pace that allowed him to get by other riders and he ended in eighth place, a result that would ultimately be key in his overall finish.

An excellent start in Race Two put Stewart in the lead group early and he held a spot in the top-five until the closing minutes of the motos, when other competitors made their way by and pushed Stewart back to sixth place.

Stewart got another good start in Race Three and after some back and forth passes with others on the track, he settled in and crossed the finish line in ninth place. The 8-6-9 scores put Stewart seventh overall on the night.

“The Triple Crown at this race was really gnarly and unfortunately a lot of guys got hurt, so I want to say a prayer for all of those guys. It was one of those races that you just tried to get through. You couldn’t push it too hard on this track,” Stewart reflected after the race.

“I struggled in practice, but the race was much better for me. I am happy to walk away from this one, to be honest. A lot of people had big crashes. We have some work to do and I find myself in a bubble, but that’s part of racing. I could have been worse, I could have been better, and I was seventh overall tonight. I have my starts down and that makes it easier for me, I can be in the front right away. I need to work on what I can and go from there.”

Stewart is now seventh in the 450 Class Championship standings. 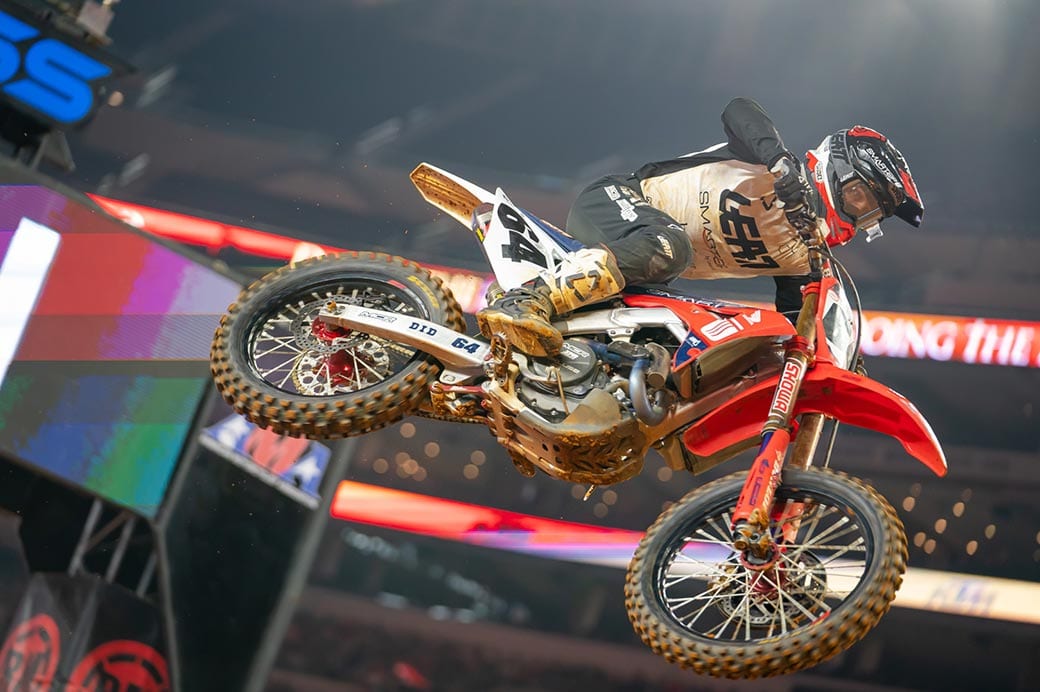 Vince Friese has been one of the most consistent riders in the 450 Class through the first part of the season, a streak he extended with a good showing in Arlington, but left Texas determined to make progress and better his results.

The Triple Crown races put even more importance on qualifying, and despite some struggles with the track in the afternoon, Friese qualified 18th overall and advanced into the night’s races. A top-10 start in Race One put Friese into a good position early, which made for close battles with other riders and a 12th place finish.

A very poor start in Race Two put Friese at a disadvantage on the opening lap, but he focused on going forward and made impressive passes on other riders to reach 11th place at the checkered flag.

By Race Three, Friese felt much better on the track, started within the top-10, and followed his team-mates for key lines and a much faster pace that led to a 10th place finish. Friese’s 12-11-10 scores put him 11th overall on the night.

“The day was okay. It started a little tough. I feel like I am riding okay but then the lap times aren’t there in practice,” Friese noted at the end of the night.

“I didn’t have the speed I wanted in the first two races, I was 12th and 11th. But in the last one, my speed was there and I really came alive, I finished 10th, and that put 11th overall. My team-mates went by me and I latched on to them, which upped my pace and that’s something I was happy with. I have either been the slowest fast guy or the fastest slow guy, in that no man’s land. In that last race, I had that top-10 pace, which makes me happy. I just have to be better about making that happen earlier.”

Friese is now 14th in the 450 Class Championship standings.

“This was one of our better races,” shared Team Manager Tony Alessi. “In the final moto, the team had all three riders in the top-10, which is great. Justin got the ball rolling early on by leading the qualifying times. His speed was around the top-three all day, but he had a crash here and a crash there, so he ended up sixth overall, which is very good.

“Malcolm is still struggling a little bit with some energy loss, but he was solid with a seventh overall. His starts were very good tonight. Vince posted an 11th place finish and was good in the last moto. Overall, Arlington was a huge success and we are looking forward to the next race in Atlanta.”

The 2020 Monster Energy Supercross Series continues this coming weekend with round nine, the 2020 Atlanta Supercross, at Mercedes-Benz Stadium in Atlanta, Georgia. 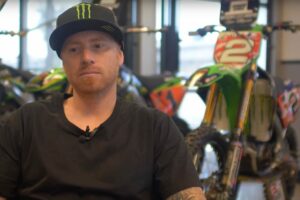 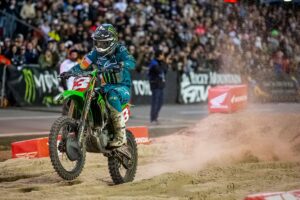