It was a format shake-up at round four of the 2020 Monster Energy AMA Supercross, an FIM World Championship with the first of three Monster Energy Supercross Triple Crown events that drops the gate three times in each class.

Roczen made the victory almost look easy, leading 38 out of 39 total laps raced over the three 12 minute plus one lap Main Events. Monster Energy Kawasaki’s Eli Tomac’s 2-2-3 finishes earned him second place and also a move into second position in the championship points. 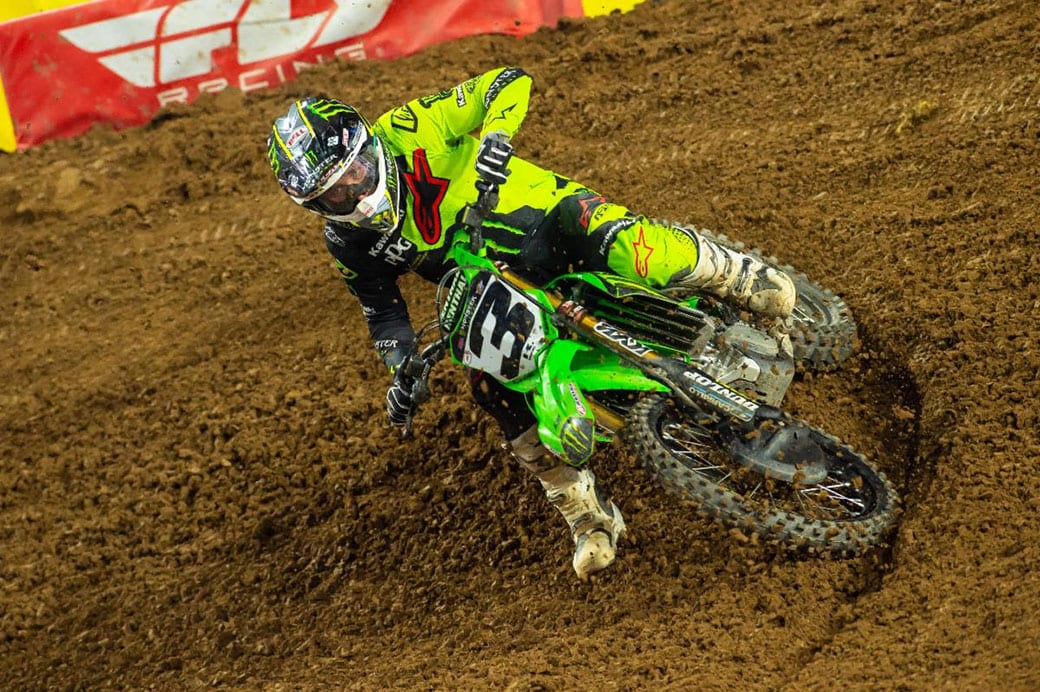 Grabbing his second podium of the year, 2018 Monster Energy Supercross champion Jason Anderson of the Rockstar Energy Husqvarna Factory Racing team got onto the box with Main Event finishes of fifth, third, and second. The Western Regional 250SX class also had its first repeat winner as Monster Energy Pro Circuit Kawasaki’s Austin Forkner dominated the first two 250SX Main Events then rode strategically in the third to cap the night with his second win of 2020. 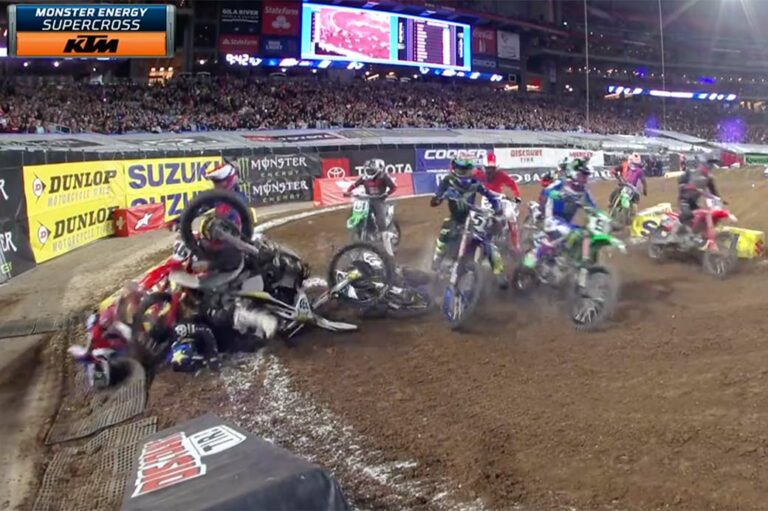 The second Main Event was red-flagged after a tangle in the high speed first turn that left Rocky Mountain ATV/MC KTM’s Justin Bogle on the ground where the track re-joins the start straight.

In the re-start, Roczen led the race from holeshot to chequered flag. Tomac had to work his way through the pack from fifth place at the end of the first lap. He got into second on Lap 4 of the 13-lap race but never dug far into Roczen’s lead, which got to seven seconds at one point.

Defending champion Red Bull KTM’s Cooper Webb ran in second place early in the race, but he struggled to find speed in the long whoop section where he lost positions to Tomac, Anderson, and Rocky Mountain ATV/MC KTM’s Blake Baggett.

After the second win, Rozcen looked forward to the final Main Event. “The most important thing is to keep the focus,” he said. “The track’s extremely slippery… It feels great, I’m just having fun out there but we’ve got to keep our mental game strong and be focused out there… Everybody’s going super fast so we’ve just got to stay on our game.”

The final 450SX Class Main Event also saw a red flag and a full-race re-start. And just as before, Ken Roczen used that re-start to his advantage and pulled another holeshot. Tomac bobbled and tipped over in the second corner; he and team-mate Cianciarulo found themselves both outside the top 10 while once again Webb had put himself into second place early in the race.

Anderson got around Webb and into second place just before the halfway point, then with just over three minutes left on the clock Cianciarulo battled his way past to take third place. As Tomac made his move on Webb, Cianciarulo crashed hard in front of them in the whoops. Webb nearly went over the bars riding over Cianciarulo’s downed bike but held on for fourth. 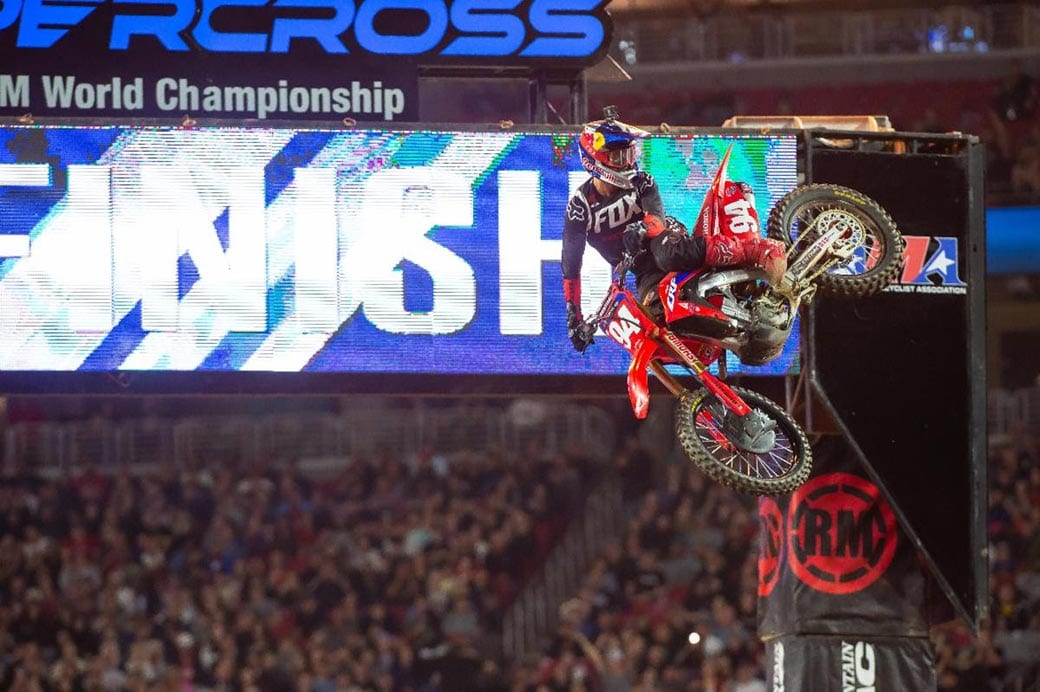 Roczen’s third time up on the podium was for his third Main Event win of the night and also to claim the overall for the event, “Oh my gosh, this is amazing. I was praying before the last one to make it through safe… Three Main Event wins and first overall, I’m over the moon, it’s just unbelievable.”

At the end of the night, Tomac was gracious toward Roczen but ready for the next event. “Ken was lightning fast tonight… I did what I could,” said Tomac. “The racing was kinda wild. We had five starts tonight, that was tough. I mean, everyone’s doing the same thing, but [there’s] a little bit of wildness on these Triple Crowns.

“Glad to get through the pack and stay second overall. [The] last moto there, I missed my rear brake in turn two, that was it for that moto win, for having the chance at it. But overall still feeling good, ready for next week.” 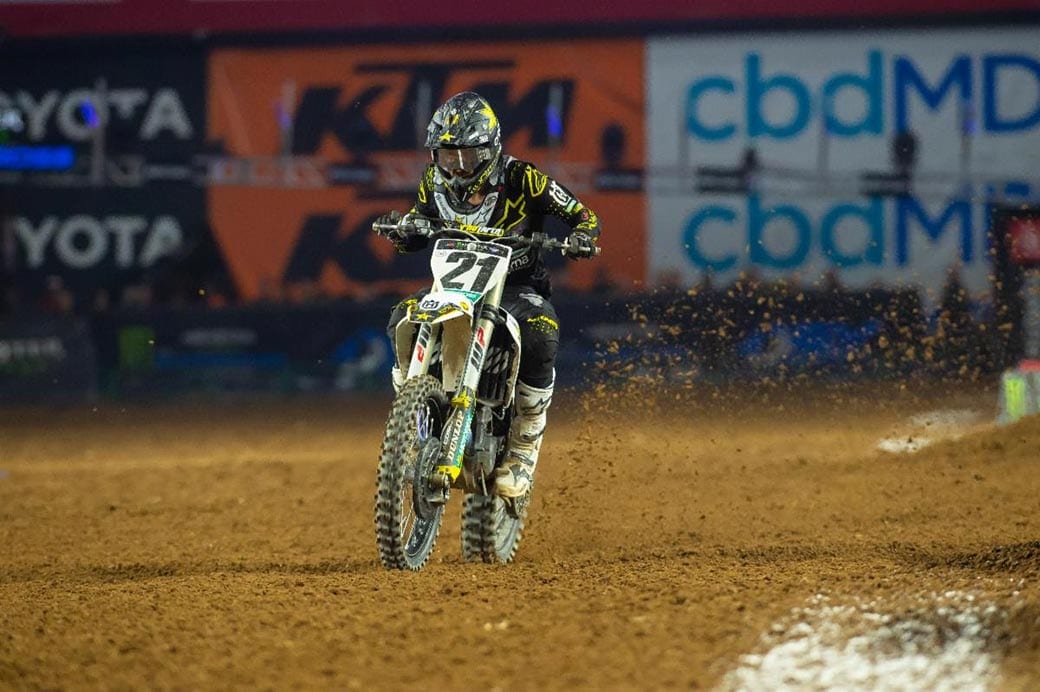 Jason Anderson was leading the race prior to the restart. On the podium he said: “…I feel like I’m racing better and better as the weeks go on… I’ve been top five every race, but kind of like very quiet, in kind of a pleasant spot in the series. But I’m ready to start charging and see if we can make some headway.

“Kenny and Eli, they’re riding good, but I’m ready to get in there and maybe try and upset them a little bit… I feel like they’re [Rozcen and Tomac] getting up front and they’re breaking away right away and I just need to make sure and be there with that breakaway so I could try to pressure them or do something along those lines, or be in front of them and hold them up. We’ll see how it goes, but I’m looking forward to battling and I’m enjoying it.”

In the 250SX Class Main Event #1, GEICO Honda’s Christian Craig nearly grabbed the holeshot, but Austin Forkner pushed into him mid-corner and Craig went off the track. The contact allowed JGRMX / Yoshimura Suzuki Factory Racing’s Alex Martin to slip into the lead. In less than a lap Forkner was able to regain the lead and the Kawasaki rider was never challenged. Behind him, two riders who had a controversial on-track incident last week, Craig and Monster Energy / Star Yamaha Racing’s Dylan Ferrandis, were close on the track as they progressed through the pack together. They never got close enough to see if there would be a re-ignition of last week’s trouble and finished second and third. Points leader Monster Energy / Star Yamaha Racing’s Justin Cooper had two crashes that left him with a 17th place finish to start the night poorly.

When asked how much time it took to get back into the race after the first turn incident, Main Event #1 winner Forkner said: “No time at all, really. As soon as I got past Alex there on the first lap, I think, I mean it was game on, so I just tried to push and be smart, be smooth. I felt good, I felt good all day in practice, so I was pumped to get that win.”

Justin Cooper jumped into the lead on the opening lap of 250SX Class Main Event #2 but just a minute and a half into the race he tucked his front wheel and went down in the corner before the whoops, handing the lead to Troy Lee Designs / Red Bull / KTM’s Derek Drake. On another part of the track, Christian Craig had problems of his own and pulled into the mechanics area and out of the racing for the night. Forkner was on the move, and just past the halfway point moved past Drake to take the win. Ferrandis recovered from a poor start and moved into second on Lap 8 of the 11-lap race.

Asked what was making the difference on the track for Forkner, he answered: “…It’s just getting the rhythms every lap. That quad over there is tough, and it’s just being consistent and being smooth. So just going back to trying to do what I did last year: being smooth, consistent laps…” 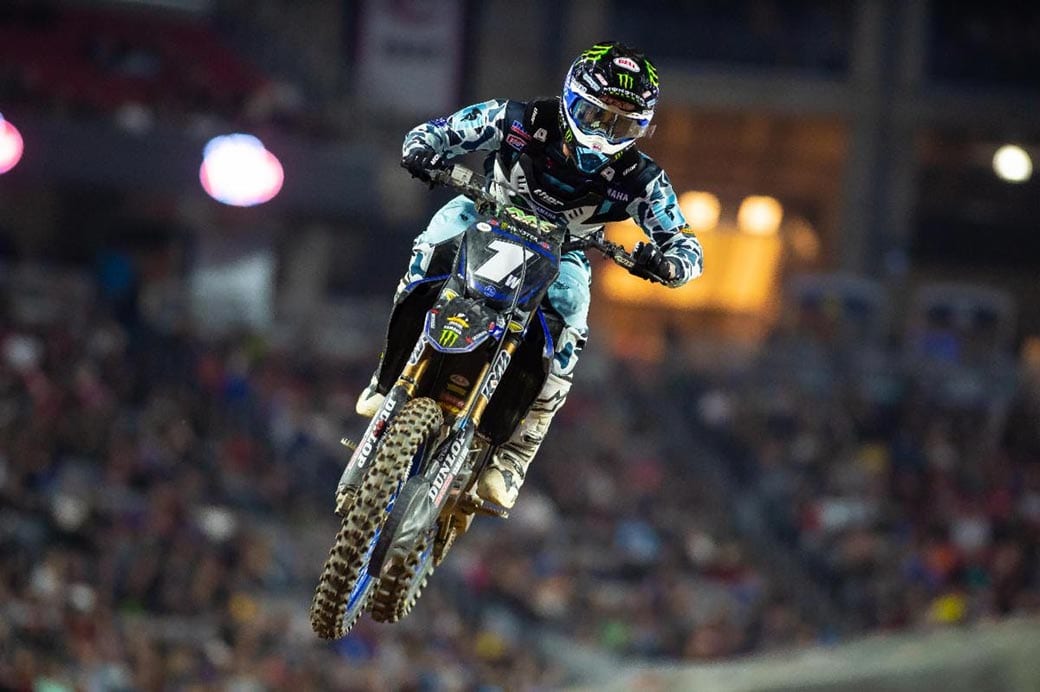 The final 250SX Class Main Event went right for points-leader Cooper; he led every lap to have an uneventful end to his night’s racing. His team-mate Ferrandis once again was forced to recover from a poor start; the Frenchman made it up to second place but never got close to Cooper. Forkner started outside the top five and made some passes quickly. From there he rode strategically, knowing his position right behind Ferrandis would mean a win for the night. 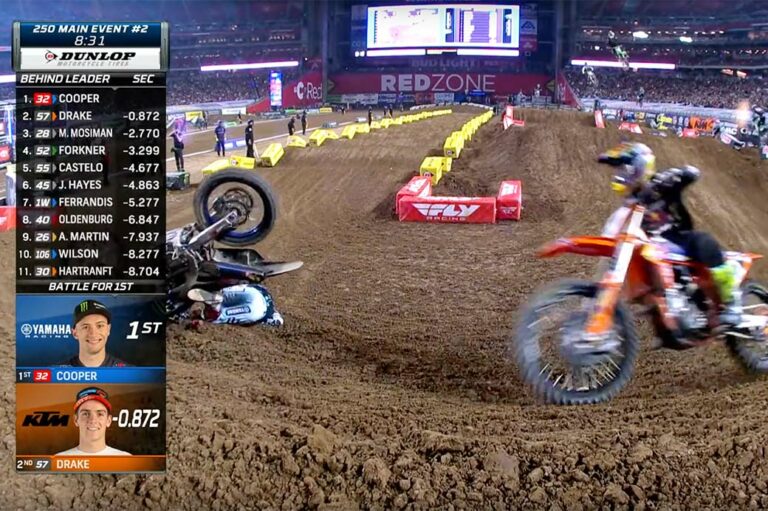 Forkner was happy to rebound from a disappointing finish the previous weekend, “Once I got into third I kinda tightened up a little bit, to be honest. The first couple laps just weren’t the greatest, I was kinda shuffling around with some guys and then just kinda rode in third. I figured if I got third with how we were running that I would get the overall… It was just about race management and I feel like I managed it really well.”

Ferrandis wanted more than second place but was happy to pull within three points of Cooper in the championship, “Yeah, for sure. It’s better than before this race but yeah, kind of disappointed a little bit. I feel like if my two first starts were better, I could have fought for the win a little more, but yeah it’s not a bad day today.” 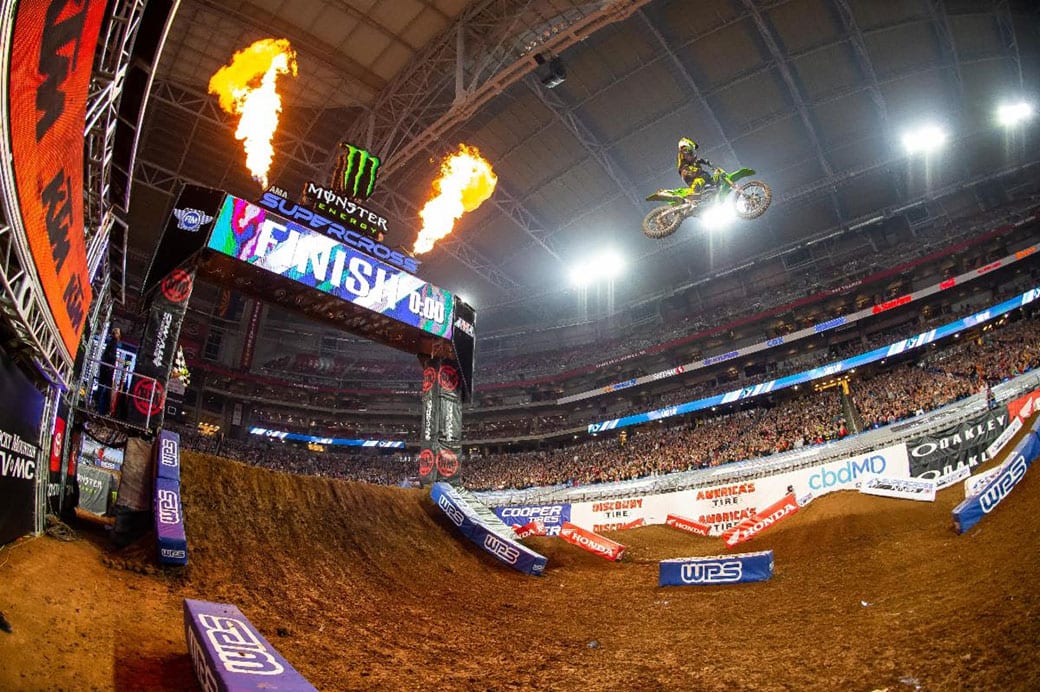 Rockstar Energy Husqvarna Factory Racing’s Michael Mosiman got on the box with his first podium of 2020, “With this season I’m riding a lot better and the expectations are higher, and so a lot of time I just carry that pressure with me. And today was just about riding for myself and riding for my god, and once I put those things in place and in priority I could relax. Because I know the effort I give…”

Justin Cooper, fresh off a Main Event win, was not happy with his ninth overall finish. “…To come out and do this one [Main Event #3], it’s kinda what I needed to do. It just felt good to do clean laps and end the night like this. But pretty hard day for me, up and down roller coaster. This sport is brutal, and it keeps you on your toes. We’re just going to keep doing what we’re doing, doing the best we can, we’re going to learn from this… It’s just been a rough day. I had a big get off in practice and just been feeling good, just things just didn’t go my way today. Just gotta come back into next weekend, do the same work in the week and come back and fight for that win next weekend to be there.”

The series moves to RingCentral Coliseum in Oakland, California next weekend with a return to the standard Heat Race and single Main Event format for each class. The next two Monster Energy Supercross Triple Crown events are on February 22nd at AT&T Stadium in Arlington, Texas, and at the penultimate series round on April 25th at Sam Boyd Stadium in Las Vegas, Nevada.