Eli Tomac and his #3 Monster Energy Kawasaki KX450 ascended to the top step of the podium at Round Three of Monster Energy AMA Supercross, an FIM World Championship.

Racing returned to Anaheim, California for the second and final stop at Angel Stadium, with Tomac grabbing his 28th career 450SX win, meanwhile 450SX rookie and team-mate Adam Cianciarulo continued to impress by finishing in sixth place amongst the title contenders.

For the third week in a row, the Monster Energy Kawasaki dynamic duo kicked off the day by qualifying with the two fastest times as Cianciarulo clocked the fastest lap time of 51.865 with Tomac hot on his heels in second with a 51.934. The two Monster Energy Kawasaki riders were the only two riders to put in a hot lap in under 52 seconds. For the third week in a row, Cianciarulo was the fastest qualifier heading into the night show.

Carrying the confidence of qualifying into the night show, Cianciarulo shot out of the 450SX Heat Two gate in second place, but by the second turn had already claimed the lead. Cianciarulo began clicking off laps where he was able to lead the first half of the Heat Race before surrendering the top spot and finishing second. 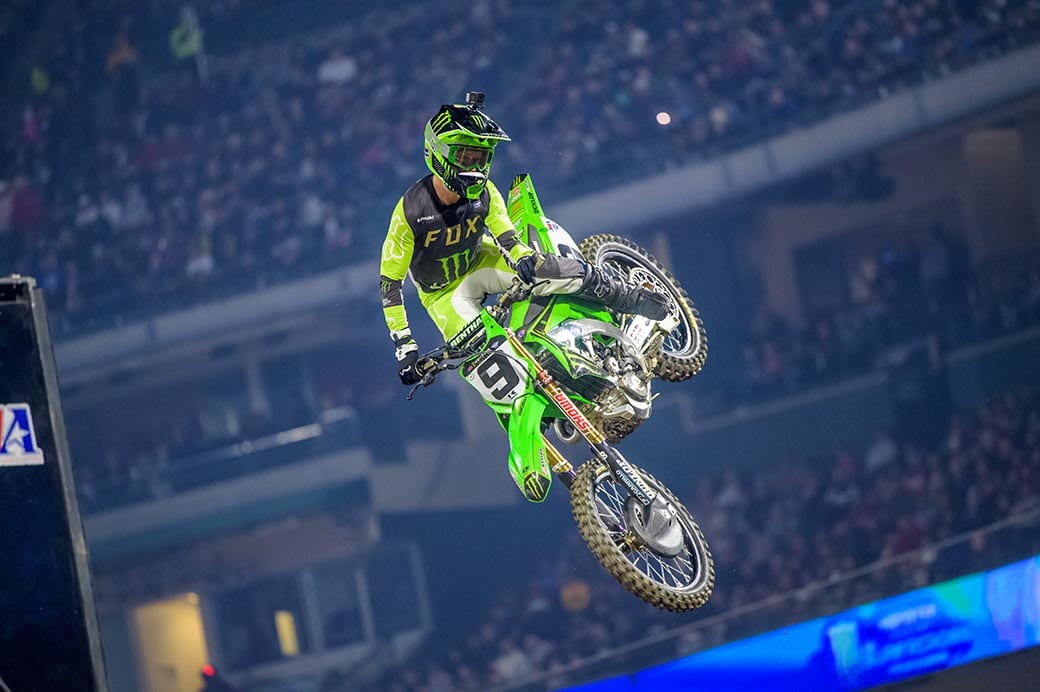 In the 450SX Main Event both Tomac and Cianciarulo found themselves wedged out and sitting mid-pack after the first turn. Both racers began making quick work of the competition and followed one another toward the front of the pack.

Tomac was able to manoeuvre his KX450 around the field and sliced his way into first place just before the halfway point of the race and never looked back, claiming his first 450SX victory of the year.

Tomac’s win puts him into third place in the championship point standings and only five points back from the leader. Cianciarulo was able to maintain a top-five position for the majority of the race but would ultimately cross the finish line in sixth place overall.

“Today was the day we worked for all off-season,” said Tomac. “Things were just clicking all day, we qualified second coming into the night, and in the first Heat Race we were able to get out front early and just kind of set the tone for the rest of the night. In the Main, I didn’t get the best jump of the gate, but I was able to find some good passing lanes and remained aggressive in the opening laps. The two sets of whoops and dragon back were so mentally and physically demanding, I believe that is where I was able to separate myself from the rest of the pack.

“All in all, I can’t thank my team enough, the whole Monster Energy Kawasaki crew for all the hard work this past week, it definitely paid off tonight. I am looking forward to Glendale next weekend and to race a Triple Crown. My first 450SX win came in Phoenix and the high-intensity Triple Crown format really suits my racing style.”

“Today was a bit of a rollercoaster ride for me,” said Cianciarulo. “I was able to qualify on top again which always helps going into the night show. In my Heat Race, I was able to get out front but my buddy Ken [Roczen] got by and I settled into second.

“In the 450SX Main Event, despite my start, I felt like I was riding well and making good progress. I began to go forward and was able to make my way up to fourth, but unfortunately, I made some minor mistakes that cost me a better result.

“Sixth place isn’t where I want to be, but it is a long season and we are going to keep grinding. I am looking forward to the Triple Crown format next weekend in Glendale and the three gate drops we get to race.”