Monster Energy Pro Circuit Kawasaki is satisfied with their efforts after coming through a challenging opening round at Angel Stadium in Anaheim. But Austin Forkner has been left disappointed with the decision from the officials to penalise him after he took what he thought was a safe option.

Forkner, who was making his return to racing after taking the summer off to rehab a knee injury, took the chequers in third place after leading the majority of the race.

The mistake that cost him the lead meant he had to remount his Kawasaki – rejoining the race, the Missouri native took the decision to go straight over to the other lane. The officials would later punish that choice and the 21-year-old suffered a two-place penalty.

Ahead of the penalty decision, Forkner said: “That was my fault, you know, I’ll just own up to that one. I felt like I had that one in the bag and that was leading to a pretty solid race. I think I would’ve held off and got the win.”

After being penalised the team released a press release with further comment from Forkner: “It was a split-second decision to be as safe as possible. That’s what they always tell us to rejoin safely and with me pointed backward and slightly left, I thought that after the next rider went by I would be fine.

“I didn’t gain any position by doing what I did. It’s a bummer they (the officials) didn’t feel the same way. After knowing I was able to put a good pace out front, I’m more fired up than ever to get back out there next weekend.” 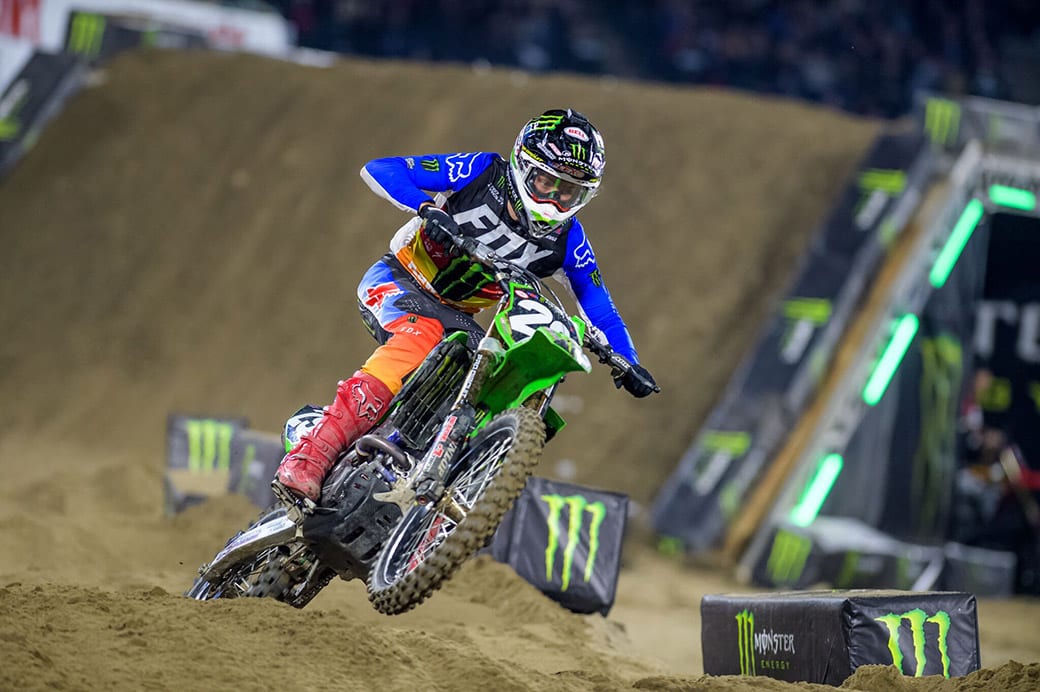 Team-mate Cameron McAdoo was making his team debut in Anaheim and was excited to start racing aboard his new Kawasaki KX250 machine. McAdoo didn’t get the start he wanted in the Main Event but raced into the top 10 after the first lap. By lap five he was in sixth position, keeping pace to come across with a solid result in his first outing with the team.

“After so much preparation, it’s nice to finally get on the track and get a finish under my belt,” said McAdoo. “We took away a lot of good from this round that I’m hoping we can work on this week to go after an even better result. I would love to be challenging for the podium and proving to these guys that I am able to run up front.”