We have a Tony Cairoli injury update… After his crash today in Russia Cairoli looked to be in some discomfort – taking his time to get up from the Orlyonok dirt in the Qualifying Race the nine-time champion elected to retire from the moto.

The good news is he should be good to go for tomorrow’s points-paying motos – it appears that he was mostly winded, that’s according to his wife Jill.
“Thanks guys!! [for the kind messages],” she wrote on her Instagram Story. “Tony Cairoli is OK!! He didn’t get air after that crash in the quali moto, that’s why he stayed on the ground a few seconds… all good for tomorrow.”

Update: This from Tony – “Good match day and up to a few laps from the end of qualifying feeling good! Unfortunately in the final bad fall and fortunately after some tests nothing is worrying tomorrow we will be behind the gate.”

TC222 is going to need one of his famous getaways when the gates drop tomorrow. With Jeffrey Herlings back and Romain Febvre and Tim Gajser looking strong, it should be a great day of racing. 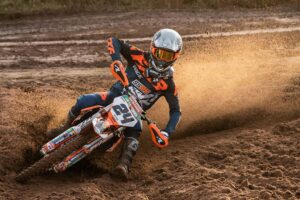