Taking place at the man-made track inside the historic Assen circuit, the penultimate round of the 2018 FIM Motocross World Championship saw the Rockstar Energy Husqvarna Factory Racing duo of Thomas Covington and Thomas Kjer-Olsen claim second and third overall respectively in the MX2 category.

Securing a spot on the MXGP class podium for the third time this season, Max Anstie was third overall at Assen.

Putting his sand racing skills to good use, Max Anstie raced two strong motos at the Dutch circuit. Starting his weekend with fourth in the Qualifying Race, the young Brit had a good start in the opening MXGP moto to cross the line in third position. Wrapping up the weekend with fourth in moto two, Max collected the points needed to secure third overall at the GP.

Not getting good starts in either of the two final MXGP class motos, Rockstar Energy Husqvarna Factory Racing rider Gautier Paulin was forced to dig deep in the sand at Assen. Collecting 7-8 results in the two MXGP motos, the Frenchman secured seventh overall at the GP of The Netherlands.

Max Anstie: “I’ve been working hard during the last few GPs to get to the point where I am right now and it feels good to be able to battle for the podium. I’m feeling better and better.

“I’ve had some good races and some not so good races over the last couple of months but now it seems that everything comes together and I am able to show my speed.

“This weekend I had some good battles and one of them was with Glenn [Coldenhoff] for third in the last moto. At first I didn’t know if I had to beat him to get on the podium or not, so I was doing my best to make this pass. Once my pit crew told me that fourth was enough to get that podium result, I was able to relax and ride my own pace. It feels nice to be up on the box in this tough category.” 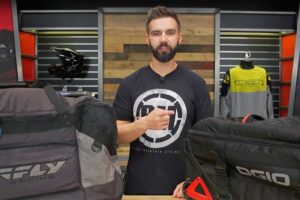 Gautier Paulin: “My pace was good but I struggled with my starts and that made my life a lot harder. Not getting good starts and having to come from the back of the pack is always hard, but in this track it seemed to be even harder.

“In the opening moto I was outside the top-20 in the first laps and managed to get back to seventh. Then in moto two, I got eighth following another bad start and this was really the best I could do.

“I am a little bit disappointed to be honest, as I felt good on my bike throughout the weekend and I really wanted to do well. It’s onwards and upwards from here and we are now heading to the big final in Italy.”

Unable to finish the Qualifying Race following a fall, Thomas Covington was left with a mountain to climb in Sunday’s final MX2 races. With his FC 250 powering the young American to two great starts from the far outside of the starting grid, he quickly found himself battling for the top three in each of the two motos. Securing a pair of third place results, Thomas managed to earn a spot on the MX2 podium for the seventh time this season.

Showing good speed around the challenging sandy track, Rockstar Energy Husqvarna Factory Racing’s Thomas Kjer-Olsen secured a runner-up first moto result. Despite suffering a minor fall after the second moto’s halfway mark, the Dane crossed the line in fourth place for third overall at the GP of The Netherlands.

Thomas Covington: “The weekend didn’t start that well but I managed to turn things around.

“I had a crash in the Qualifying Race and put a hole on my radiator, so I was not able to finish the race. I had to start both final motos from the complete outside and with the way the starting gates are angled it seemed kind of impossible to get a good start. Nevertheless, I did my best out of the gates in both motos and got some good speed to be inside the top three in the first corner. After that, I did my best to keep it on two wheels. The track has been really sketchy over the weekend and it was crucial to stay out of trouble. I felt like I rode a little bit on the safe side in moto one, but then in the second moto I had to dig deep.

“It’s good to have the whole Rockstar Energy Husqvarna team up on the podium this weekend.”

Thomas Kjer-Olsen: “My riding was good over the weekend. I had a good feeling in both motos, but I made a small mistake in the final race and had a fall. I wasn’t satisfied with my performance during the Qualifying Race, but I knew that once the racing got started I could be up front and battle. I got two good starts and felt that I was riding great.

“I am happy to be back on the podium for the second GP in a row. I’m happy about my weekend here in The Netherlands and our eyes are now set to the big final in Italy in two weeks time.”

The Rockstar Energy Husqvarna Factory Racing team will return to action at the final round of the 2018 FIM Motocross World Championship in Italy on September 29/30.