With Romain Febvre suffering a crash to take him out of a podium spot at the MXGP of Argentina, Monster Energy Wilvo Yamaha MXGP’s Gautier Paulin stole the show for the MXGP Yamaha contingent as he utilised the impeccable power and handling of his YZ450F to finish inside the top-five after falling at turn one.

Paulin was fifth in the overall classification only three points shy of the podium.

Monster Energy Wilvo Yamaha MXGP’s Gautier Paulin started inside the top-seven and showed some good speed as he forced his way into the top-five.

Tricky conditions caught out a number of riders this weekend. The final race started with Paulin and Seewer being hit by the bike of another rider, while Febvre fell heavily from third place with six-laps to go.

Bouncing back from the chaos of the opening lap, Paulin brought the crowd to their feet as he used his masterful line-choice to surge from the back of the pack and up into the top-five, which was enough for fifth overall.

“The bike was working good today,” said Paulin. “We have been working hard this winter and we had to put the bike in the crate even with some more things to work on. But today, I just had to put my helmet on and go racing.

“We know there are things we still need to improve but it is what it is. The bike is working really good. The chasis is awesome on the Yamaha, I really enjoy it, and the engine too. With the little improvements we can make, I am really looking forward to it, and I need to keep working myself also.

“I feel like I had a good weekend, just had bad luck with another rider hitting me in the first turn. I think his bike hit my bike and I went over the ‘bars big time. But overall I feel strong and fifth place to start the season, close enough to the podium is a good start. I really enjoyed the racing.”

The next round of the FIM Motocross World Championship takes place at Matterley Basin for the MXGP of Great Britain on the weekend of March 24. Keep scrolling for more MXGP content. 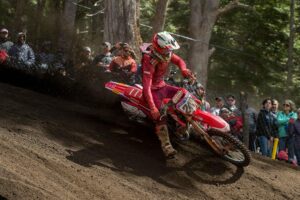