After a month’s break it was down to the legendary Farleigh Castle to do battle for the penultimate round of the 2019 Acerbis Amateur Nationals series.

The track crew did a great job of prepping the circuit for the heavy rain that came on Friday meaning it was prime once the slop had been cleared off after a few groups of practice.

It was the Craigs Motorcycles MX2 class that hit the track first this time around with Olly Jones taking first blood, but an unfortunate injury in the second moto meant the end of his weekend.

It was non-championship regular Cory McShane who stepped up to take the reins and after a fifth in race one he went on to two wins, a fourth and third to claim the overall honours comfortably over series leader Seb Berthiaume.

Another non-registered rider, Jordan Hughes, stood on the lower step of the podium with Troy Jones and Mitchell Meadows doing their championships no harm with top-five overall finishes.

In the Paradise MX Holidays MX1 category it was business as usual for Holeshot Kawasaki rider Lewis Trickett. Fresh from his top 15 in the Maxxis British Championship at Foxhill the weekend before, he went out and took control, winning four from five motos.

Brad Cavill didn’t let him have it all his own way however and took the race two victory and gave Trickett all he could handle in race three but had to settle for runner-up overall in the end.

Previous champions Andy Wilson and Ed Briscoe took third and fourth places overall but consequently lost points to Trickett in the run for the championship.

Dylan Spencer on his CPS Husqvarna had his hands full all weekend in the Moto Connection-backed 125 Two-stroke class from a Suzuki in the hands of former British youth champ Howard Wainwright.

Wainwright wasn’t scoring points but he put on a mega show for the crowd and pushed Spencer to a maximum and a healthy advantage going into the final round at Culham.

Stu Owen took the runner-up spot while Jack May made full use of the good starts he’s been nailing the past couple of rounds to claim third overall. Alan Pearce and Lewis Petfield rode solid all weekend to take the fourth and fifth place prize packets.

California MX Dreams 250 Two-stroke leader Adam Harris managed to claim a pair of wins on Saturday and a moto win in the slopfest on Sunday morning, meaning he could manage a pair of runner-ups for the overall victory.

Matt Ridgway pushed him hard the whole way and even claimed a race four win on his way to the runner-up spot while Brad Wheeler nailed a start in the final race of the weekend and took the win to help him to third overall for the weekend.

Tommy Alba battled his way through to finish fourth and Josh Turner took his Yamaha to the podium presentation with fifth.

In the Matthew Rudd Photography Ladies category, enduro specialist and championship leader Jane Daniels had a nightmare eighth in the first race meaning a bit of work was needed if she was going to stand on the top step by the end of the weekend.

Another enduro specialist – Rosie Rowett – stood on the lower step of the podium while Nadiya Jones lost points in the championship to her nearest rival.

It was battle royale for a change at the front of the LS2 helmets-sponsored Vets Over 40s as Brian Wheeler and Gary Davies went at it at the front. Wheeler needing to make last-lap passes for wins is an unusual sight but this weekend it was a necessity for him to be able to claim maximum points.

Davies was unlucky to not have a race win over the weekend but back-markers and mistakes are all part of the game and they cost the Kawasaki rider in the end.

Danny Blakeley was best of the rest on his two-stroke Yamaha while Danny Tollet and Barry Gray rounded off the top five.

Chris Brown has one hand on the Roberts Plant Engineering Vets Over 50 championship after pulling another 20-plus points on his nearest rivals and claiming the overall win in the process.

Simon Molter finished the weekend off with fourth overall and Morton Hannah picked himself up off the deck after a start crash in race two to take home fifth.

It was Ross Hudson who took overall honours in the Manchester Xtreme Junior Open category with an 8-3-1-2-1 scorecard.

Race one and four winner James Chandler was hampered by a 15th in race two that left him seven points short of the top spot while Ryan Davis and Finley Smith were separated by three points for the third and fourth places overall.

Aiden Carney closed in on series leader Ben Stanley as he took fifth. 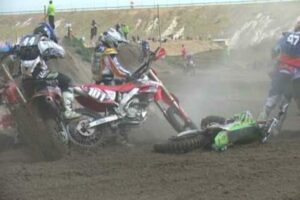 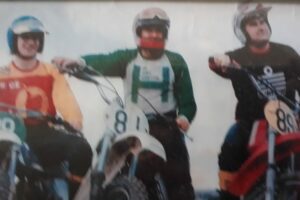 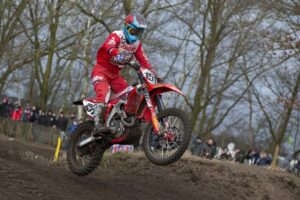 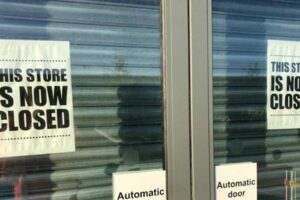