Pablo Quintanilla has ridden to victory on stage nine of the 2020 Dakar Rally. The Rockstar Energy Husqvarna Factory Racing rider put in an excellent performance on the 410-kilometre stage to slowly build his pace from the start, going on to claim the win by close to two minutes at the finish.

Stage eight of the Dakar Rally was cancelled for all riders in the motorcycle class out of respect for Paulo Goncalves who lost his life on Sunday. Competitors returned to racing today with the long, 886-kilometre stage nine that led the field from Wadi Al Dawasir to Haradh. Initially faced with an arduous liaison, riders then entered the timed special that presented all with a challenging route made up of rocky tracks and stony riverbeds.

Following his eighth-place finish on Sunday, Pablo Quintanilla felt comfortable from the off this morning and was immediately able to push on the hard-packed surface. Third quickest to the first checkpoint, Pablo made his way past several riders in front to take the provisional lead by kilometre 244. Maintaining that position to the finish, despite pressure from riders behind, the two-time world champion claimed the win by almost two minutes from Toby Price. With three stages left to race, Pablo sits second overall in the provisional standings.

Taking time to feel comfortable on his Husqvarna FR 450 Rally, Andrew Short chose to initially ease his pace a little in order to minimise the risk of mistakes early on today’s stage. Finding confidence as the day progressed, the American was able to increase his speed to ultimately finish inside the top 10 as ninth fastest. Currently placed 11th overall, due in part to the 30-minute penalty he received earlier in the event, Andrew hopes to improve on his position over the course of the final three stages.

Wednesday’s stage 10 of the rally – the first half of the event’s marathon stage – will see riders head east from Haradh to the temporary bivouac at Shubaytah. A long 534-kilometre timed special will challenge all competitors’ skill and endurance as they head through the dunes of the Empty Quarter. No outside assistance or tyre changing is permitted overnight, with riders having to work on their own machines before heading back to Haradh on Thursday.

“It was a strange feeling this morning after what happened to Paulo, but I think it was good to get riding again,” said Quintanilla. “There was a long liaison this morning and it was very cold, but I felt better when we hit the special and I was able to push right away.

“In the end, I won the stage, which was a fitting way to honour Paulo. But now, with stage eight cancelled, my strategy is more complicated. My goal from here is to push and try to make up as much time over the final three days as possible.” 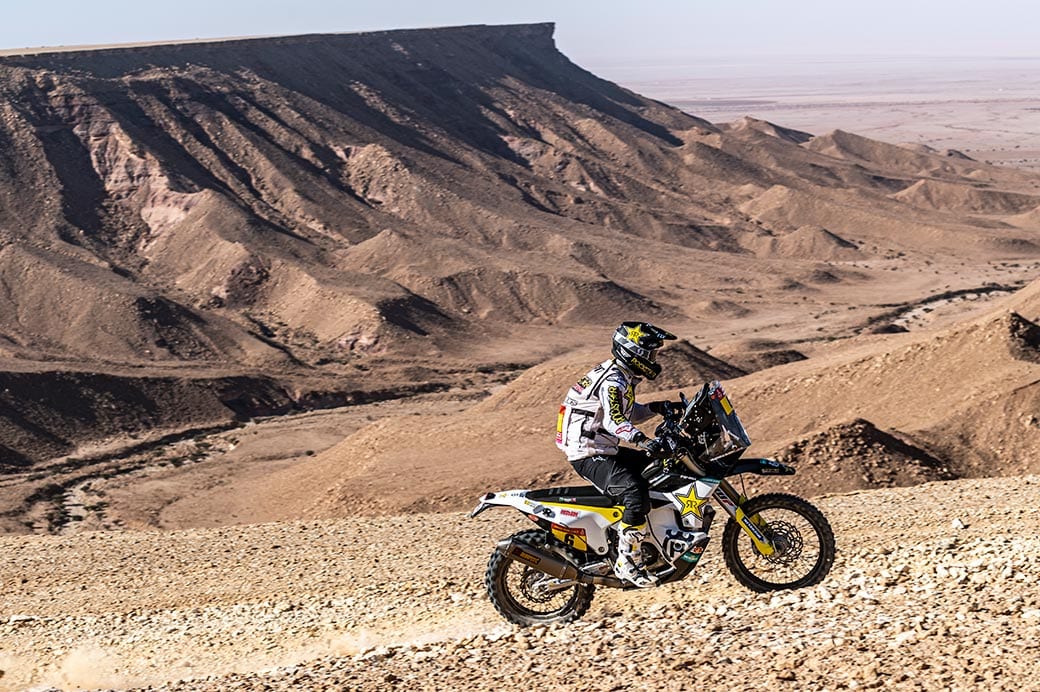 “Today’s stage felt different for obvious reasons – I just set off with the goal of completing the day safely,” explained Short.

“The first part of the special was really beautiful with some technical navigation through the canyons. The second half was more open with some really fast tracks where you could maintain a lot of speed. The best thing was I started to feel more comfortable as the day went on and was able to focus more, which is good.

“We’ve got the two halves of the marathon stage coming up now, which I normally really enjoy. It looks like the terrain over the next few days is going to be interesting and I always enjoy the novelty of the marathon stage – camping out with the other riders at the bivouac and facing some unique challenges to complete the stage.”