Billy Bolt is in pole position in the race to be British Extreme Enduro Champion (Image: Tilde Tighe)

Rockstar Energy Husqvarna Factory Racing’s Billy Bolt pulled it out of the bag to take a hard-fought victory at Cowm Quarry last weekend at the second round of the British Extreme Enduro Championship.

Bolt battled hard to eventually lead the Championship class field with confidence for the last two laps of the gruelling two-and-a-half-hour race. Red Bull KTM’s Jonny Walker crashed out of the fight for the lead on the penultimate lap, but still secured a hard-earned second place.

Local lad and SuperEnduro star William Hoare made his way up through the ranks to take third place. 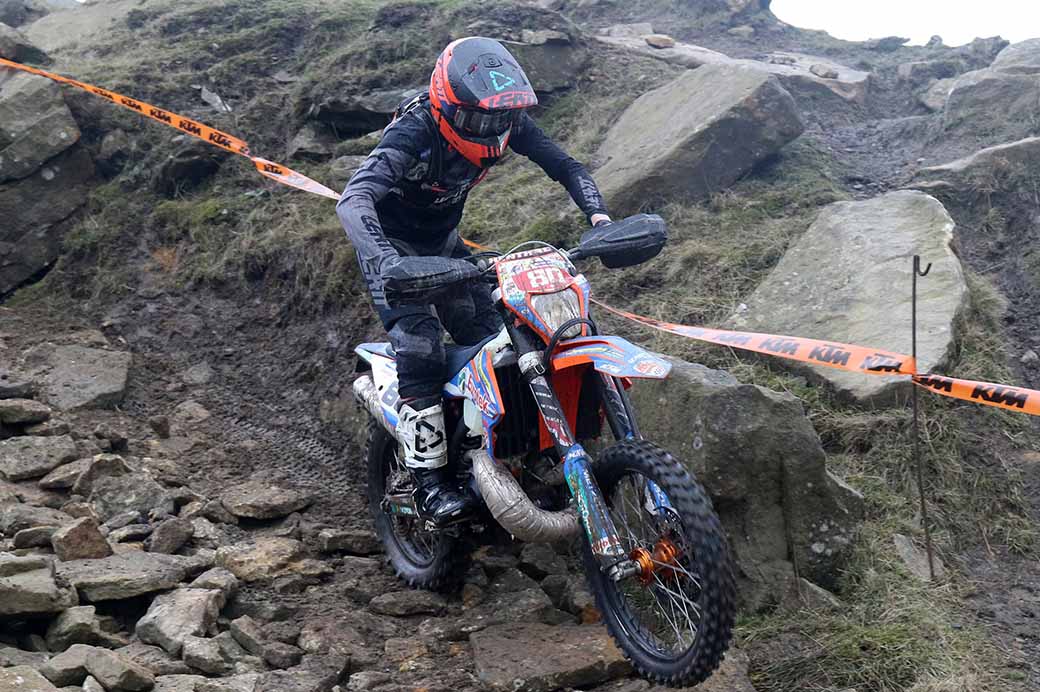 Cowm Quarry had undergone many changes in the build-up to this event with a brand-new course design, which afforded the hoards of spectators a whole new dimension to this extreme venue.

Some of the sections proved to be much harder, while the addition of a revamped woods section really twisted it up for the riders. The course, unlike Tong, ran in the same direction for both the morning and afternoon races.

Although it would have been easy for the Fast Eddy crew to choose well-established paths and routes, they decided to tear up the map book and layout something completely different.

With Storm Dennis threatening to derail the event, both races were pushed back by an hour in an attempt to avoid conditions that were too bad even for an extreme to run. 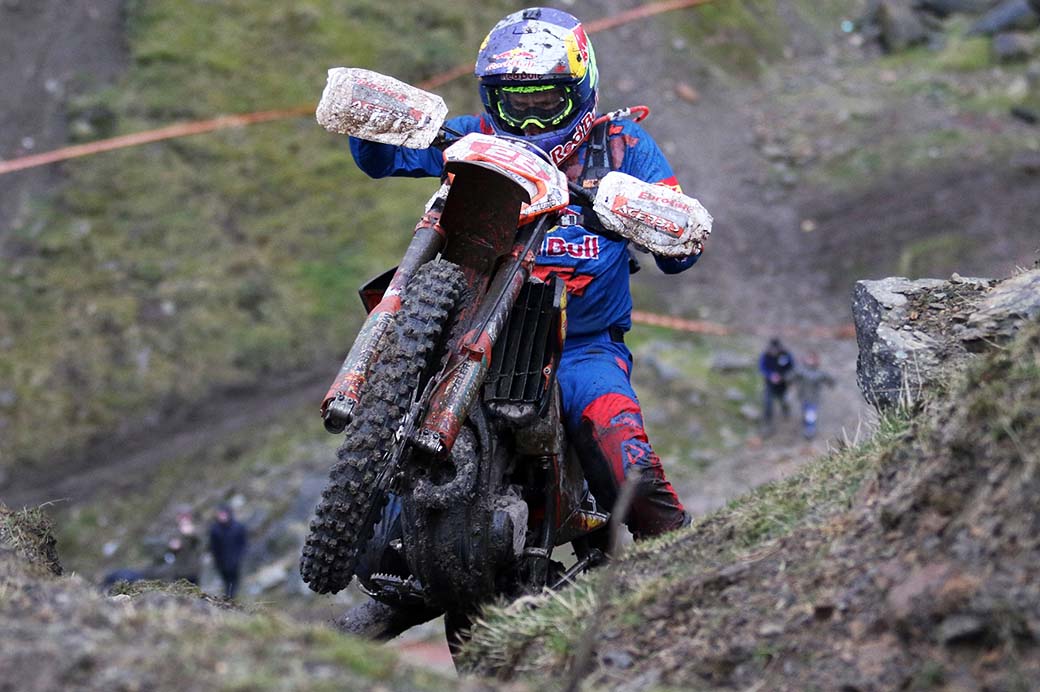 Jonny Walker had to settle for second overall behind Bolt (Image: Tilde Tighe)

Nevertheless, biting wind and bouts of driving hail cutting across the venue made for a very tough challenge for the riders, crew and spectators alike in an event that was as tough as it gets.

The course was the toughest seen yet for the Sportsman, Youth and Vet riders. Strong winds on the main hill climb demolished the track tape and forced the Fast Eddy Team to redirect riders along the bottom of the hill to avoid a serious injury.

However, everywhere else, riders simply had to get on with it, which they did, much to their credit. Unlike at Tong where Mark Houson led the morning race, flying the flag for the Vets, it was the Sportsmen who came out on top at Cowm.

Ryan Crowder dominated the morning race to take both the overall and Sportsman win on a staggering eight laps. His nearest competitor, Scott Hipwell, was never far behind and eventually finished second in class and second overall, just seven seconds behind Crowder. 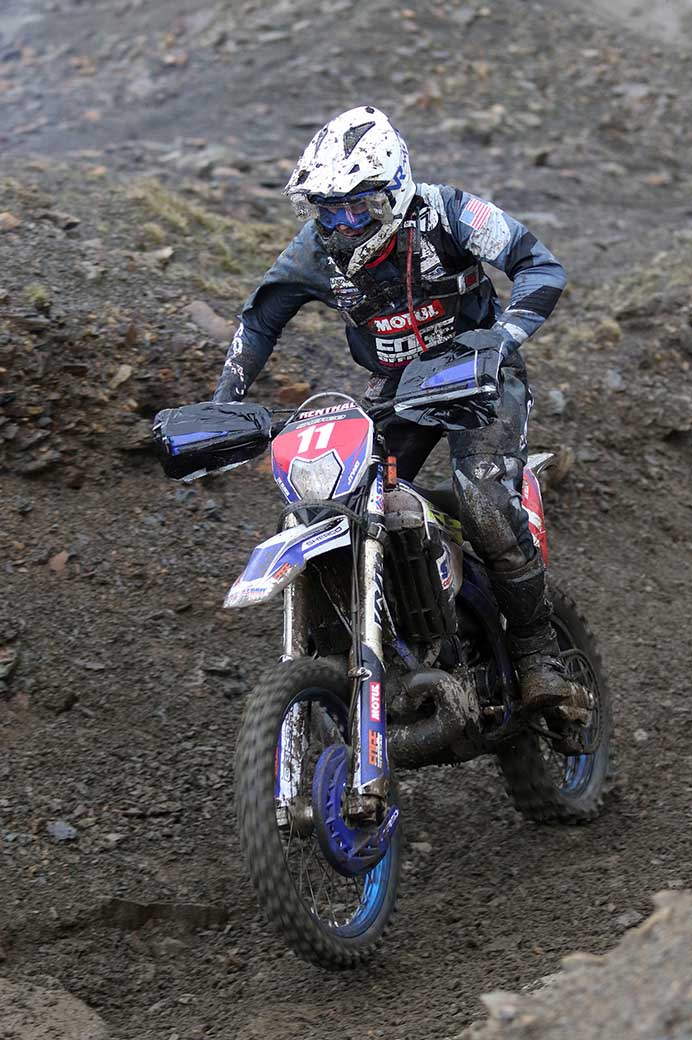 Ben Tennant came home in third in class and sixth overall. In the hotly-contested Youth class it was Doug Lote who bagged top spot and an impressive third overall, matching the top two Sportsman on eight laps.

Jacob Wilson took the runner-up place for the second time, also on eight laps, with Brandon Burns a lap behind in third. Mark Lodge in the Vets class made it to fourth overall and easily claimed first in class, but he had plenty of competition along the way.

Darren Heyes was a lap behind in second spot while Gavin Johnstone completed the Vets top-three right behind Heyes. The Championship race began at 1pm with a surge of riders battling their way through a bog into the tight first corner, then the first of many steep climbs; setting the chaotic tone for the rest of the race.

It wasn’t until riders were clear of the start area that the racing really began. Initially, it was a fierce two-way battle between Billy Bolt and Jonny Walker, with Walker leading the first lap after taking the holeshot. 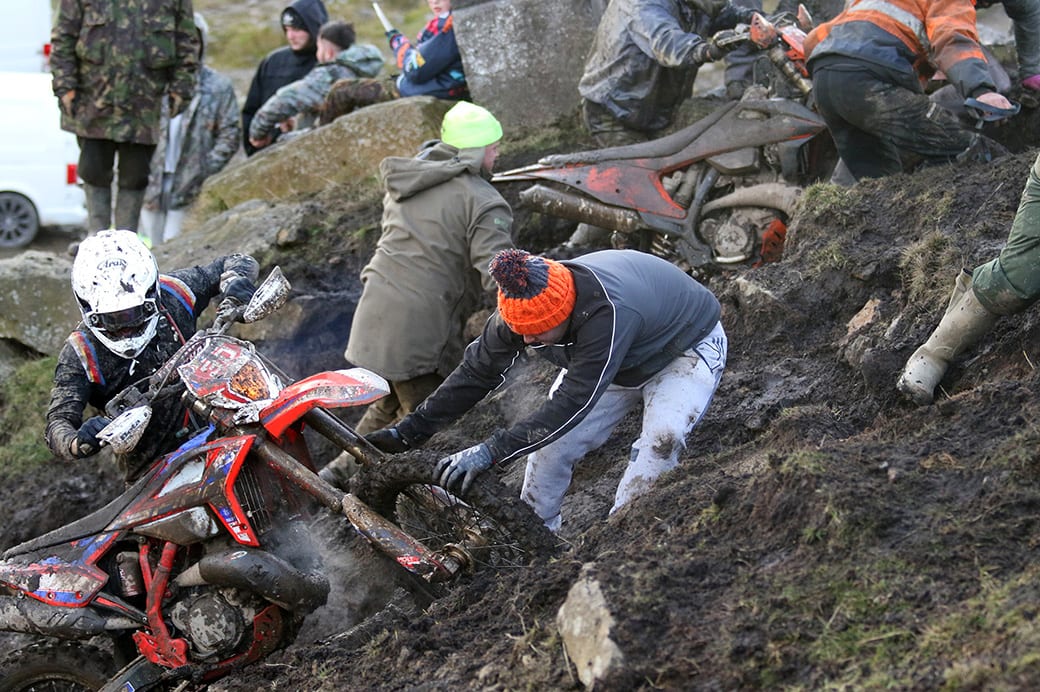 There was help on hand for unseated riders (Image: Tilde Tighe)

However, the two changed positions multiple times each lap, with tiny mistakes allowing the other to pass them, even if only for a minute. On the first attempt at the main hill climb, Walker lost his momentum just a few metres away from the summit, where Billy saw the opportunity and swiftly took the lead.

This routine was repeated continuously throughout the race, much to the spectators’ delight. However, disaster struck Walker on the penultimate lap when he fell foul of the difficult conditions and suffered an injury, allowing Bolt to rack up a nine-minute lead.

William Hoare rounded out the top three after an immense battle with fourth and fifth-placed riders Joe Deakin and Jordan Scott. A significant group of Expert riders followed the Championship class home.

Ricky Wiggins came out on top once again, making it two out of two wins this championship. He was up against some tough competition but still managed to get inside the top ten in ninth place. 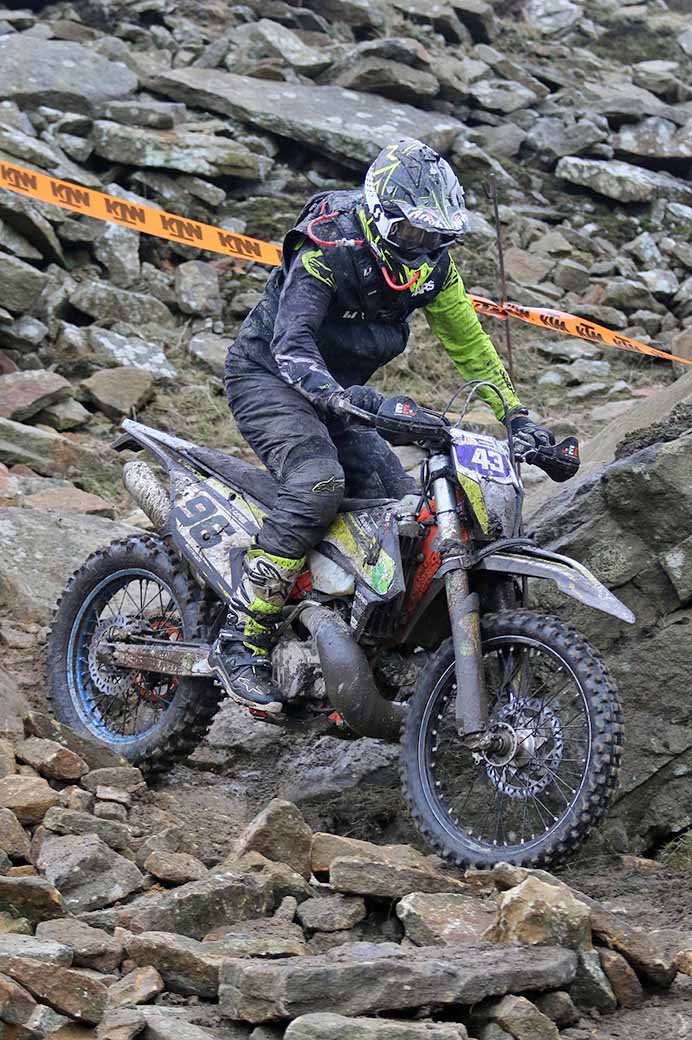 With second in class Ben Wibberley finished just outside in 11th place overall. Dave Wood was four minutes behind Ben in third.

The Clubman saw a role reversal of the opening round as Jordan Hayes beat Mitchell Brightmore to the top spot with eight laps under his belt. Brightmore made the second spot close behind, as James Allen took third in, a lap down on the top two.

As for the Elite Vets, Harold Crawford pulled it out of the bag again to take his second class win after another outstanding performance. Second place Jason Pearce was two laps behind and James Brown a further one lap behind in third.

A massive well-done to Fast Eddy and his dedicated team, who spent the week at Cowm assisted by John Wittle, as well as the spectators who turned out in their hundreds, despite the gruelling weather, to continue to support the event and Fast Eddy Racing.