Belfast’s SSE Arena hosted rounds one and two of the 2020 Arenacross Tour where series rookie Brian Hsu powered his Fro Systems Husqvarna to an early lead in both the Pro and Pro Lites championship classes.

The 21-year-old German was just one star amongst a huge cast of supreme athletes who entertained the massive crowds of race fans who packed out the SSE Arena for two nights of high-energy indoor motocross action.

While Hsu was top dog over the weekend, it was defending Pro and Pro Lites Tour champion Cedric Soubeyras who kicked the series into life by taking a convincing win in Friday night’s opening Pro Lites Main Event. 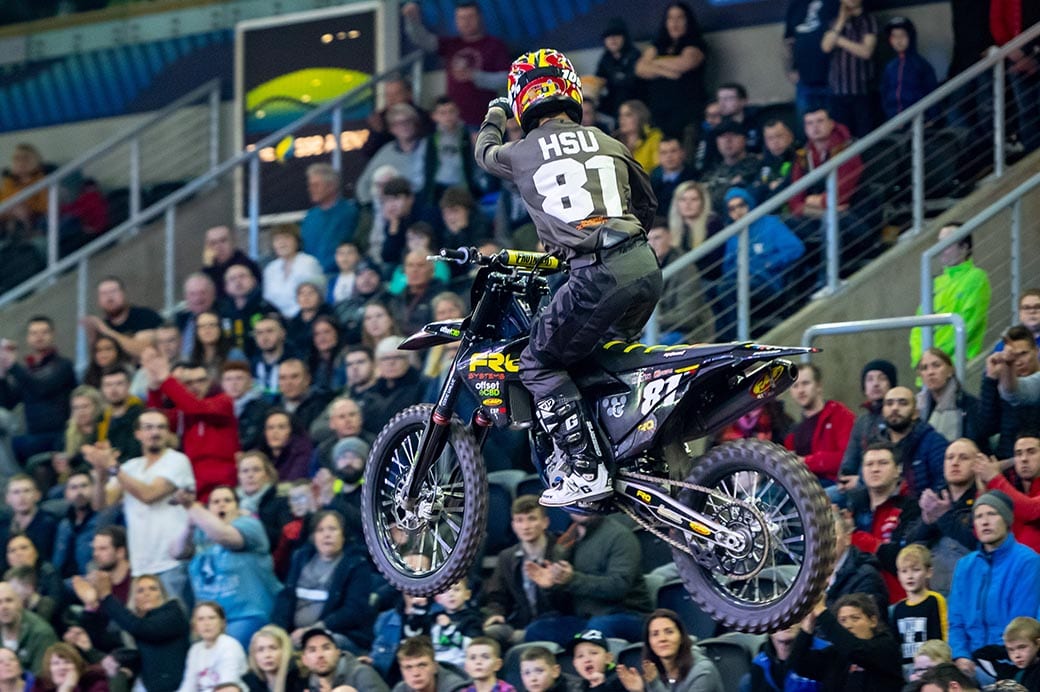 The veteran Frenchman gated well and then simply powered away from the chasing pack on his ASA United Husqvarna to rack up 12 all-important championship points in the 12-lap race. Hsu pushed Cedric to the flag but ultimately fell just short with Frenchman Julien Lebeau finishing close behind in third.

The second Main Event for the Pro Lites riders saw Soobs and Hsu switch spots at the front while Lebeau placed third once again on the Wooldridge Honda.

The Pro 450 class is similarly packed out with talent for 2020 and the two Main Events were exciting, to say the least. SR75 Suzuki’s Charles Lefrancois took a well-deserved victory in the opener ahead of three-time tour champion Thomas Ramette, who made his Kawasaki debut in Belfast for the Offset CBD/Fro Systems team. 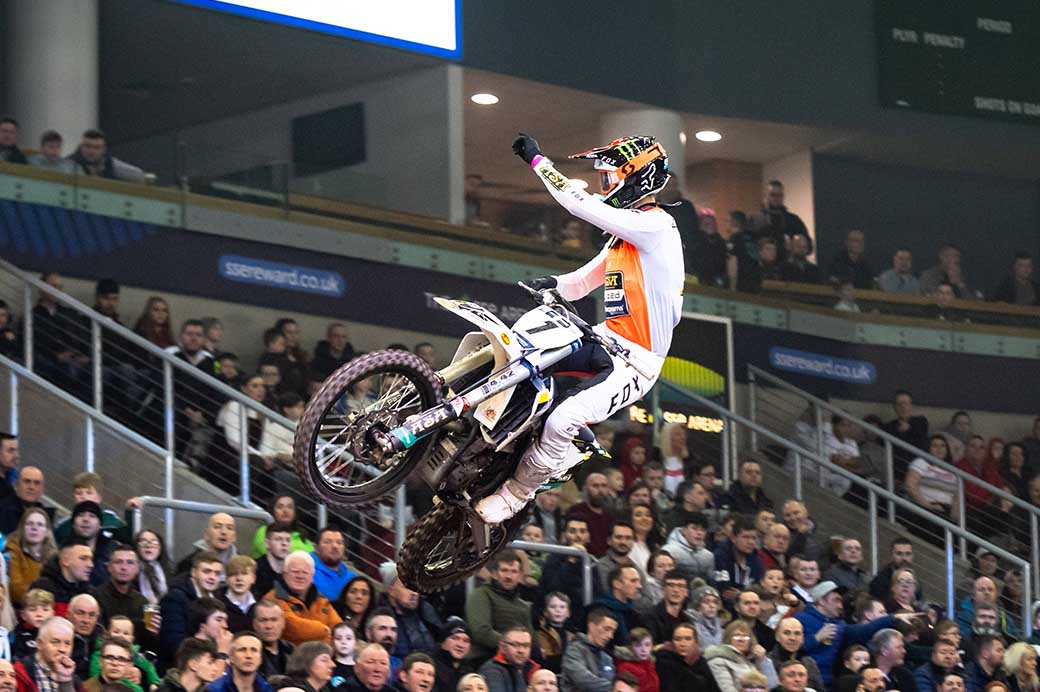 Cedric Soubeyras was runner-up in the Pro Lites at round one (Image: Mantis Pro Media)

The second 450 Main saw Ramette turn the tables as Lefrancois hit trouble and slipped all the way back to fifth. Chasing home Ramette in this one was Reardon who beat Izoird and Jack Brunell on the ASA United Husqvarna across the line.

With the dust settled, the five 450 riders who transferred directly to the Super Final were Ramette, Izoird, Lefrancois, Reardon and Bayliss meaning that everyone else would have to find another way to the night’s big race.

The Head-to-Heads boiled down to an Ashley Greedy (Offset CBD/Fro Systems) versus Angelo Pellegrini (RFX Honda) duel with the Welshman doing what he does best to take the win there.
Pellegrini was by no means done, though, and in the LCQ just about held off Dercourt to take the 12th and final place behind the start gate for the evening’s Super Final.

With tension mounting and the sell-out crowd almost at the point of exhaustion, having completed multiple Mexican Waves and had their minds fully blown by mad skills of the FMX boys, the scene was set for the big race of the night – the Pro Main Event Super Final.

To try and equal things out, the Lites riders get first pick of the gate for this race which sometimes proves pivotal and sometimes not so much.

This time it mattered a huge amount as when the gate dropped and the riders rounded the first left-hander into a high-speed rhythm section it was a Lites guy out front – Fro Systems’ Hsu. 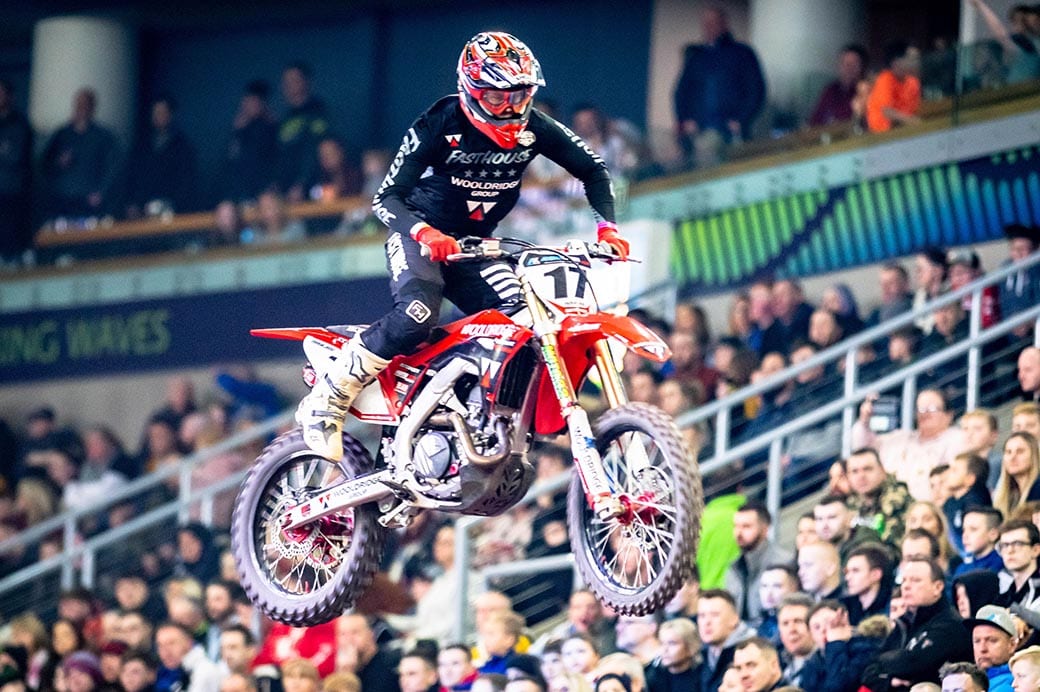 The 21-year-old German grabbed the opportunity with both hands and setting the fastest lap of the race (for an additional bonus point), eased himself clear of the chasing pack.

After 15-laps of bar-banging and block passing action, the pack had more or less sorted itself out and after around six-minutes of all-out action, Hsu led, Soobs and Lefrancois across the line to completely upset the formbook.

Behind the podium three were Reardon, Chatfield, Izoird, Greedy, Ramette and Lebeau with Woodcock trailing a short way behind in 10th. Bayliss meanwhile ended up two laps back in 11th with LCQ winner Pellegrini a further full tour behind.

Saturday’s show started on a high as Ulster legends Gordon Crockard and Jonathan Rea were presented to the partisan crowd who responded by pretty much raising the roof of the SSE Arena.

With the sell-out crowd still somewhere beyond fever pitch, the gate dropped for Pro Lites Main Event number one and it was Hsu who held the early advantage over fastest qualifier Lebeau and Soubeyras. The pace on the perfectly prepped track was high and as the laps clicked off Hsu kept on edging away.

When the chequered flag was unfurled Hsu took a convincing victory to add more points to his championship tally, finishing ahead of Lebeau and Soubeyras who led home Brit pairing Woodcock and Chatfield with Dercourt rounding out the top six.

The second Pro Lites Main was equally as frenetic with Hsu once again taking the win ahead of Lebeau, Soubeyras and Woodcock while Dercourt took a safe fifth ahead of Clayton and Chatfield who was seventh.

This meant that the five qualifiers for the Pro Main Event Super Final were Hsu, Lebeau, Soubeyras, Woodcock and Dercourt with the rest headed to the H2H and LCQ.

Ramette had been on fire in qualifying and brought that speed into the first 450 Main Event to scorch his way to victory. Lefrancois was the best of the rest and stayed within striking distance right until the end of the race.

Reardon, Izoird, Brunell and Pellegrini battled all the way to the bitter end too to finish third through sixth, while Bayliss brought it home seventh in front of a cosmopolitan freight train of locals – Ulsterman Graeme Irwin, Welsh boyo Ash Greedy and Dubliner Stuey Edmonds.

The second Main for the 450 guys saw Lefrancois top the charts while Brunell had his best ride of the series so far to finish a fine second with Izoird and Ramette in tow. Bayliss took fifth in this one ahead of Pellegrini, Greedy, Reardon, Irwin and Edmonds who slipped a lap back on his way to 10th once more.

The topsy-turvy nature of the scoresheets meant that Lefrancois was first qualifier for the Super Final with Ramette, Brunell, Izoird and Reardon also going through. 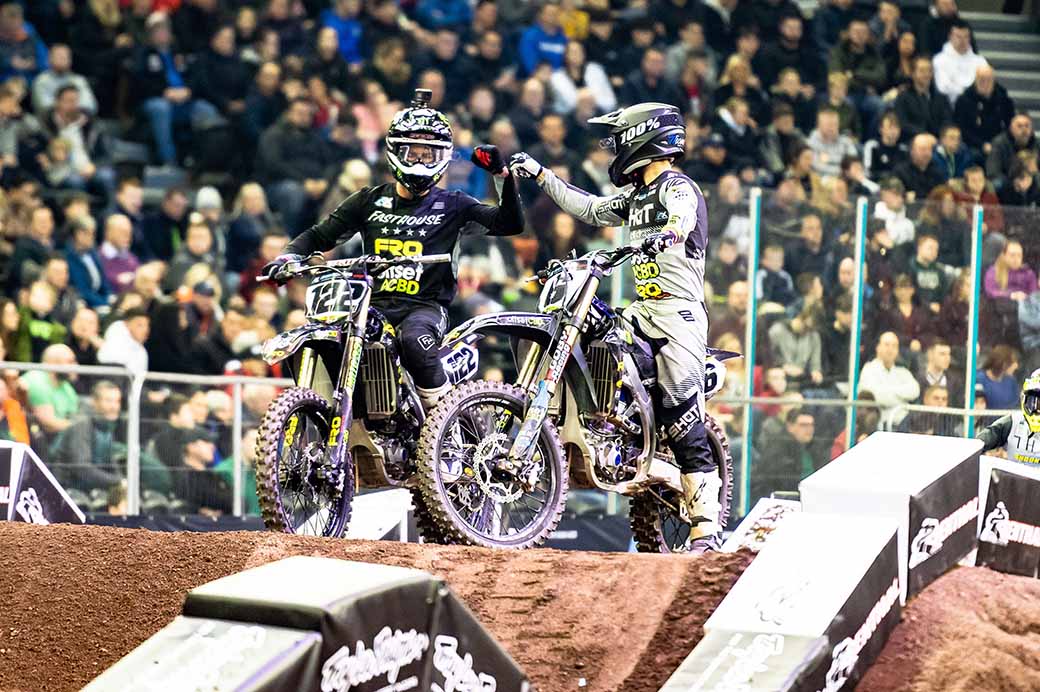 High on the energy that the Belfast fans were supplying inside the SSE Arena, series promoter Matt Bates gifted Graeme Irwin a spot in the Super Final too, meaning that 13 of the world’s fastest indoor motocross racers would battle to the flag in the big race of the night.

And if the crowd weren’t already pumped up enough at this point then they soon would be… Unlike Friday when the 250s led the way, SR75 Suzuki’s Lefrancois somehow squeezed his

RM-Z450 through turn-one first and from there pieced together 15 perfect laps to take home what he described as ‘a huge win’.

Hsu chased hard – and with two laps to go looked as though he’d get close enough to make a move – but ultimately fell just short but still finishing ahead of Lebeau. Izoird and Dercourt with Brunell, Pellegrini and Greedy rounded out the top eight.

It was a bad night for championship contenders Ramette, Reardon and Soubeyras (who gained himself a bonus point for setting the fastest lap of the race).

They gave up big points as they finished ninth, 11th and 12th in the Super Final which raises the question whether they can recover in such a short series.

Next up are rounds three and four which will be held at Birmingham’s Resorts World Arena on January 31/Feb 1.

As well as the two Pro classes, the fans inside the SSE Arena were entertained by riders in three Youth classes plus a Pro/Am All Ireland Cup for local racers. Although short on numbers, the AX Rookie Class wasn’t at all short on talent with no fewer than three riders topping the podium over their four-race weekend.

As things stand there’s a tie at the top of the championship placings between reigning champ Ben Clayton and German wunderkind Carl Ostermann, who both have 54 points apiece.

Ostermann started the weekend with a win and ended it with one as well, running a solid 3-2 in between. Clayton, meanwhile, ran 2-2, 1-2 to equal the German’s score.

The third rider to win a Rookie race was Italy’s Axel Boldrini who backed it up with a couple of thirds but had a devastating no-score in Saturday’s opening race. Jaygo Beasty was best of the rest while Robert Storer and Ryan Michigan rounded out the top six.

Expect an influx of fresh mainland Rookie talent at rounds three and four, where the added expense of a sea crossing is removed.

With a rejig for 2020, the Supermini class was dominated by Charlie Irwin who ran 1-1, 2-1 over the course of the weekend with Raife Broadley a close 2-2, 1-2. This gives Irwin a four-point advantage in the championship chase headed into round three. 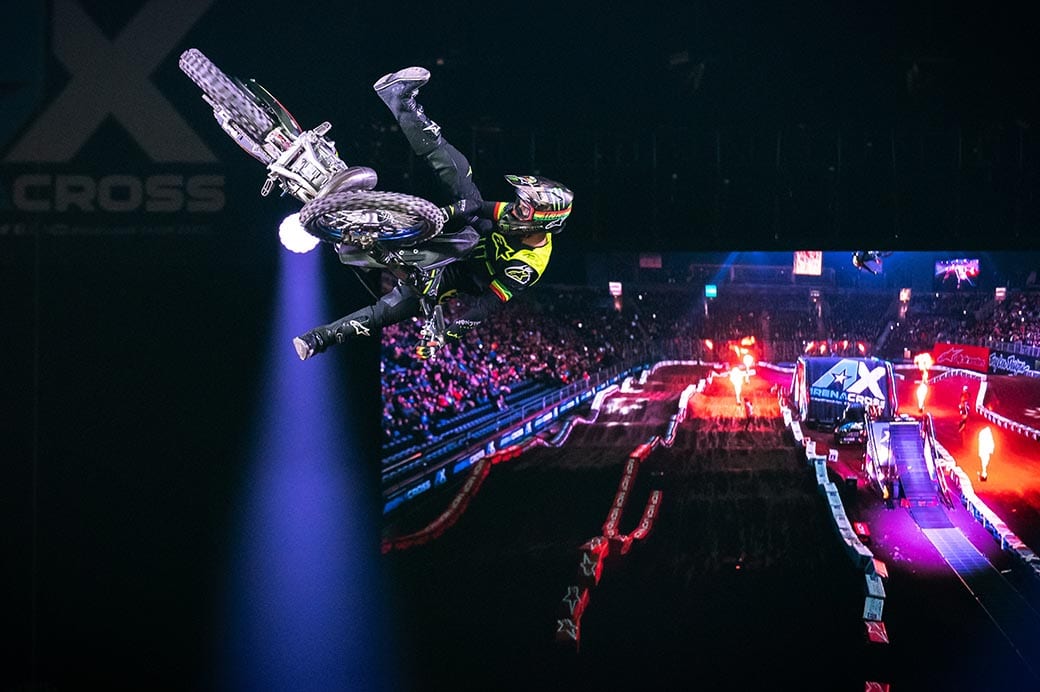 Both Matthew Beattie and Supermini-class rookie Isaac Ash impressed over the weekend as well, with Ash sitting third in points with a 3-3, 4-4 scorecard while Beattie had a steadier start but came good, in the end, running 6-4, 3-3.

There was no stopping Drew Stock in the 65cc class as he took maximum points over the weekend with a display of outright dominance.

Last year’s Auto champ Robbie Daly ran an amazing 3-3, 2-2 and sits second in the championship with Dean Alexander Rudnik third after finishing second both times on Friday then running 4-4 on Saturday.

Another rider worth a mention in this class is young Arthur Moore who was the only Auto rider in the 65cc class and acquitted himself well against the older riders on bigger bikes.

Arthur sits a fantastic fifth in the championship chase behind Fabian Junior Morrison who hit the podium on Saturday night with a fine third-place finish to repeat the performance he put in earlier in the day behind closed doors.

There was a little bit of drama in the All-Ireland Cup on Friday night when the top four finishers from race one – James Mackrel, Jordan Keogh, Dylan Stynes and Jay McCrum – were all disqualified for jumping on waved yellow flags, meaning that Paul Atkinson was awarded the win ahead of Kevin Donnelly and Jake Hall.

Normal service resumed on Saturday with Mackrel, Stynes and McCrum running 1-2-3 in both races to fill the podium.

In the mini, single-weekend All Ireland championship, Mackrel secured victory with a six-point advantage over Atkinson while Stynes was a further two points behind.